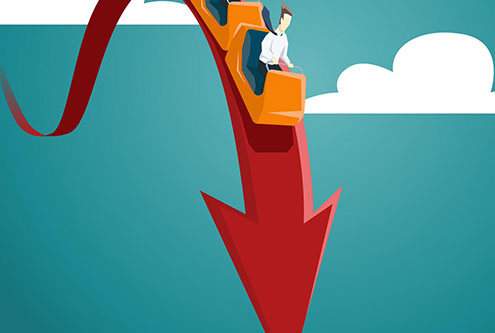 Alexander Paraschiy, the Head of Research at Concorde Capital, discussed the prospective of Ukraine without IMF’s lending

Is Ukraine threatened with default without IMF lending and how long can we hold out on gross reserves?

Without cooperation with the IMF and other international financial institutions, Ukraine is threatened with default no later than a year. Such a conclusion can be drawn from forecasts of Ukraine’s gross international reserves, which the National Bank published in its latest inflation report.

Our gross reserves will barely stay above the critical level of three months of future imports for the next three years, according to NBU forecasts.

It’s very undesirable to drop below that level because alarms will go off with every foreign investor and observer about how there’s a problem in the country.

At minimum, they will more meticulously follow the prospects of returning reserves to a safe level. If they don’t see those prospects, they will start to panic. In this case, we can forget about new investments and loans for Ukraine.

The forecasts of a safe level of reserves is based on simple assumptions by the National Bank that during 2019-2021, when we have planned significant expnses for state debt, we will have the possibility to renew our reserves with IMF financing and other Western partners at a total sum of USD 9.7 bln. Our government will also have access to private loans, with the issuance of Eurobonds, at a total sum of USD 8.5 bln.

What will happen if these assumptions aren’t fulfilled can be illustrated in the following graph. 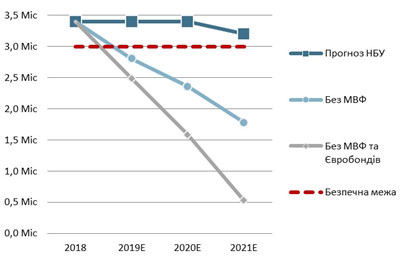 Without IMF credits already at the end of this year, our gross reserves will surpass the level of distress, but the chances for returning to a safe level will remain.

It’s possible that Ukraine might even be able to attract several billions from private lenders, but only on the condition that they have faith in renewed IMF cooperation (as in 2017, for example).

However, if returning to such cooperation doesn’t occur, reserves will begin to fall ever more steeply next year, when no one will be interested in new Eurobonds and international ratings agencies will sound the alarm and reduce Ukraine’s rating to pre-default levels.

Yet no one will wait for reserves to fall to the level of 1.5 months of future imports by the end of 2020. Already by the middle of next year, capital will begin to leave Ukraine and what is widely known as a default will occur.

A default is a loss of trust, by its essence. Trust in Ukraine’s financial system, in the Ukrainian currency (UAH 40/USD and all that). Ultimately, trust in the Ukrainian government could be undermined as well.

Therefore, in order to avoid default, it’s critically important for the Ukrainian government to renew IMF cooperation, no later than the start of 2020. Then there will be funds from both Western donors, as well as private lenders.

As an alternative, it’s possible to find currency to replenish reserves (about USD 18 bln) in other exotic places. But the last such attempt – in which Viktor Yanukovych agreed with Vladimir Putin to USD 15 bln in loans – was very expensive for Ukraine.

Of course, another option – everyone bringing their gold to the maidan, as depicted in the last episode of “The People’s Servant” – is beyond exotic.

Default declaration by Ukraine may cause additional risks for attracting funds...
Scroll to top