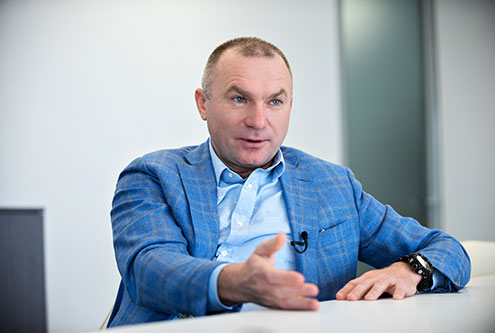 Igor Mazepa, CEO of Concorde Capital, comments on the path of reforms in Ukraine, how to improve the investment climate and what can be expected from privatization in 2019

Igor Mazepa, CEO of Concorde Capital, comments on the path of reforms in Ukraine, how to improve the investment climate and what can be expected from privatization in 2019 for Ukrainian media platform InvestoryNews. Part 1 of the interview.

— Five years have passed since the Revolution of Dignity. In your view, when did we lose the chance for quick reforms and the arrival of foreign investors?

In essence, reforms didn’t work out, with two vital exceptions.

But very many events didn’t occur in a real way. Privatization didn’t occur. A true judicial reform didn’t occur. True reforms in pensions, medicine, land … The loss occurred in the first two years (after the Revolution of Dignity) when the Verkhovna Rada was more-or-less constructive. When it concentrated itself around the president, around the coalition. But in the last three years, the coalition began to tear at the seams. And that had its consequences. If they voted, they voted for “bucks.” And all that became a kind of a mess.

The next tipping point is the creation of anti-corruption bodies. That also occurred with a loud screech. With a large sabotage from the side of officials, amid very large pressure from Western creditors, politicians.

As you can see, an entire series of examples of such inactivity or sabotage occurred that led to Ukraine becoming a very toxic place for many investors. Earlier arrived investors are truly fleeing from here, and rarely do new investors arrive. The cost of borrowing in Ukraine is many times higher than for analogous countries, such as Egypt, Belarus or Uzbekistan.

— If the situation depended on you, then how would you return investors to Ukraine? What needs to be changed for investors to stop perceiving our country as toxic?

— In regards to the land market, there is the notion that if a foreign investor comes, he will use the land in a way that Ukrainians wouldn’t want, such as extracting all its value. We’d like to hear your view on this.

A free and effective land market is not a novelty in the world – comments Igor Mazepa. Foreign farmers and investors are very surprised that Ukraine doesn’t have a market. That’s when it has existed throughout the world for hundreds of years now. Nothing similar in the whole world has happened. If you own an apartment, you’re not going to bring it to ruin. The same is with the land market. When you rent land for a short period, it’s then that one extracts the most from it. Then not even grass will grow there, literally. But if you understand that this is your land, that you bought it for USD 1,500 per hectare and if maintain it well, then it will become your valued asset that you can see for USD 3,000-4,000 per hectare. In this case, you will treat your land with care. Because it is your today, your tomorrow, your next 10 years and even 50 years if you don’t sell it.

I also heard the argument that foreign investors will arrive and will buy everything. Just how? Here is a parcel of land, a foreigner buys it, and yet the parcel still remains. A foreigner won’t haul away 40 mln hectares for transit. Normal people certainly won’t be doing that. They will be coming here to hire locals to sow the land, cultivate it and care for it. To one’s own land, I stress, that is located on Ukrainian territory.
By the way, our productivity is many times less than in Western countries. So effective technologies will come here as well.

— How do you see privatization in 2019? Is it realistic for the government to gain the UAH 17.1 bln in revenue that it is seeking?

We have already become used to parliament setting inflated plans for revenue from privatization. Yes, the figure of about UAH 17 bln has been in our fiscal plans since 2014. But on average, since 2014 we have not had such revenue exceed UAH 1 bln per year.

Privatization offers an entire series of functions. Firstly, it’s a means of replenishing the budget. Secondly, it’s a means of attracting an effective owner. Everyone loves to publicize it whenever some manager, some company or some furniture sellers arrive here. But a furniture retailer is not coming here because he is opening a store on advantageous conditions, but because he is thinking that he’s not yet on this market. Besides coming here on his own, he is bringing with him technology, the best specialists, engineers, marketing experts, consultants, auditors, accountants, lawyers, and lenders. Western banks lend with pleasure to representatives of Western foreign companies in Ukraine. After all, these banks are familiar with these companies for decades, if not centuries, in other markets.

To put it bluntly, a foreign company, having entered a Ukrainian asset put for sale, brings banking, financial and legal infrastructure, besides budget revenue. In addition, it brings the best foreign practices in conducting business. What does that mean? It means that if a government official demands a bribe for a small or large question, you simply won’t give that bribe. And the official will understand that that door is closed. And you go about your business. But if an official starts to create hurdles, for example, withholds a license that you have a right to, then an ambassador will approach him. Or the prime minister won’t be invited to a meeting.
Will that rescue the country? Privatization is a necessary thing in combination with others. As a whole, all this can turn our country into a comfortable and attractive place to engage in business – states Igor Mazepa.

— What assets can be realistically sold?

Realistically all assets could be discussed, including the Odesa Portside Plant. Ihor Kolomoisky once paid nearly USD 600 mln for it and even won a tender. I think Tymoshenko was prime minister then. And now, no one will buy this asset even for USD 100 mln probably. It’s always a question of price. Probably, an asset analogous to the Odesa Portside Plant would cost USD 1 bln to build from scratch. But there are reasons why no one will pay even USD 100 mln. There’s no business there, no business model.

So it’ll be better to gain USD 10 mln than having negative value tomorrow because the enterprise’s debt will become a lot higher than its final value. Everything is headed that way. Wear and tear and everything that goes with it. The same is the case with the natural gas pipeline. It’s the pride of the country, a blue chip. It has sane management now. But if it changes, if the market changes, then what? One thing is certain – the government is a worse operator and administrator of any assets. So selling needs to be done as quickly as possible. Everything needs to be sold. There are private nuclear power plants in the world, but not here. Another example is railroad beds. Our government has grabbed it because that whole monopoly would collapse otherwise. But that would be for the better. That sooner that happens, the better because more effective private operators would come.

I believe that everything should be privatized and in the maximally shortest timeframes. And for the prices offered by the market.

— What will the budget gain from privatization in2019?

So far, we have one asset, the President Hotel in Kyiv. All the other assets – Indar and Krasnolimanska, for which we participated in a competition and truly won – were blocked from privatization by court rulings. The privatization of the four heat and power plants was canceled in January this year by the government.

Nothing is apparent so far with the President Hotel (Kyiv). By its appearance, it’s large and attractive, with 360 rooms and 60% occupancy rate. But in fact, the hotel was rented to a private operator in 2009. In essence, there is no President Hotel (Kyiv) there. There is some kind of a revenue stream that the operator pays to the State Property Fund for its rental agreement. That’s why, unfortunately, there is a high likelihood that we will not be selling the President Hotel, but its rental agreement – commented Igor Mazepa.

Those who think, and I’ll say with a lowercase letter, that the hiltons, four seasons, intercontinentals, and other chains are interested are highly mistaken. Of course not. In this situation, it’s interesting only to some kind of local entrepreneur who knows how to handle this situation with the rental agreement in the courts, making the needed “payments,” hiring some expensive lawyers, or some other way.

Igor Mazepa offered this views in an interview with the editor of the investment media platform Investory News https://investory.news/igor-mazepa-tochno-odne-derzhava-najgirshij-operator-j-upravlinec-bud-yakix-aktiviv/

Continued in the second part of the interview.

The international markets were ready for Zelenskiy’s victory. IMF cooperation...
Scroll to top